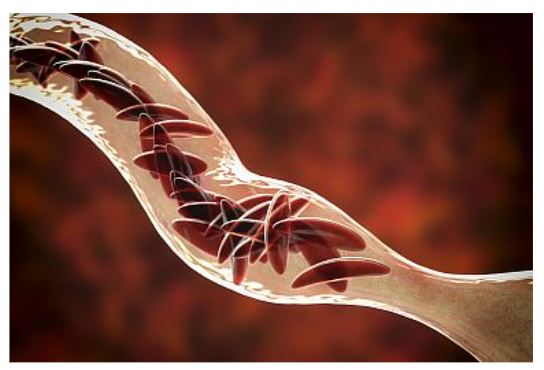 Sickle cell disease (SCD) is a genetic disorder caused by a mutation in both copies of a person’s HBB gene. This gene encodes a component of haemoglobin, the oxygen-carrying protein in red blood cells. The mutation causes haemoglobin molecules to stick together, creating sickle-shaped red blood cells. This can lead to blood cell rupture, anaemia, recurring pain, immunodeficiency, organ damage, and early death. Bone marrow transplants can cure SCD, but appropriate donors are hard to come by. The procedure also carries risks of dangerous side effects.

Several new SCD treatments are currently under development. These involve gene editing of the patient’s own bone marrow cells to produce normal-functioning haemoglobin. These treatments avoid the risks associated with bone marrow transplants. But they also carry risks of their own because they involve introducing new DNA and cleaving existing DNA strands.

A team of researchers, led by Dr. David Liu at the Broad Institute and Drs. Mitchell Weiss and Jonathan Yen at St. Jude Children’s Hospital, developed a method that avoids some of the risks of other gene editing approaches. It uses a molecular technique called base editing, which changes a single letter of the genome without cutting any DNA. Several NIH Institutes supported the research, which appeared in Nature on June 2, 2021.

In SCD, a T replaces an A at a key location in the HBB gene. While base editing can’t reverse this change, it can convert the T to a C instead. This produces a naturally occurring, non-pathogenic variant of hemoglobin called Hb-Makassar. The researchers designed a molecular tool called an adenine base editor that recognizes the mutated part of the gene and converts the T to a C.

The researchers used the adenine base editor on blood-forming stem cells from human SCD patients. Up to 80% of cells had the sickle-cell haemoglobin gene converted to the Makassar variant. For testing, the team transplanted the edited human cells into a mouse model of SCD. At 16 weeks after transplantation, 68% of the donor-derived stem cells had HBB genes edited to Hb-Makassar. Red blood cells derived from these stem cells had significantly reduced sickling.

Since human red blood cells can’t survive in mice long enough for extensive testing, the team next took stem cells from a mouse SCD model, edited them, and transplanted the edited cells into another set of mice. After 16 weeks, the Makassar variant made up almost 80% of the haemoglobin in the recipient mice. Control mice that received unedited cells had characteristic SCD symptoms: anaemia, abnormal blood cell counts, sickle-shaped red blood cells, and an enlarged spleen. Mice given the edited stem cells had greatly improved symptoms.

The researchers took bone marrow from the mice that had received the edited stem cells and transplanted it into a new set of mice. The new recipients had healthy blood cell counts, confirming the durability of the gene editing. The researchers further determined that editing at least 20% of SCD gene copies was enough to maintain healthy blood measures. They didn’t detect any side effects in the mice from the gene editing process.

“The approach offers promise as the basis of a potential one-time treatment, or perhaps even a one-time cure, for sickle cell disease,” Liu says.

The team is now working to develop the concept further, with the eventual goal of reaching patients.